A Question of Character 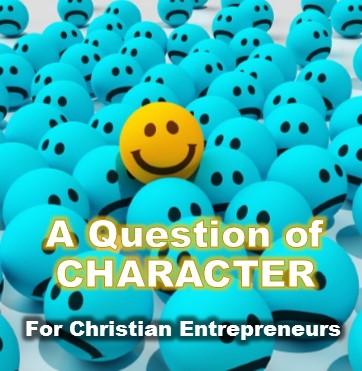 While integrity is something people see through actions, character is what arises beyond those actions and causes the decision to act with integrity.  It is something that comes from the core of who we are.

In our last article we defined integrity as treating others as anything less than valuable children of God.  Let’s try to nail down character in the same way.

Character is the internal driving decision to act with integrity.

One of the questions we had in the article on integrity was: Do you pay what you should pay even if you are charged a different price from a supplier?

Character is what it takes to notice the difference.  Most people would write it off as getting a good deal, but a person of character would make the call and verify the price.

Another question was: Do you show up when you say you will show up even if an emergency pops up?  This one is a tough one, but let’s identify character.

Character takes the moment the emergency arises and communicates to all outstanding responsibilities.  In other words, you would still be a person of integrity if you did not make the meeting if you called and explained the situation to the person you were meeting before the meeting actually takes place.

I guess you could say that integrity is the action and character is the decision that initiates the right action.  We have to become aware of what the right thing is to do and then our integrity comes out to make it happen.

Some people will say that character and integrity are the same.  That is fine.  But if you dig into the word origins you can see a difference. “Integrity” comes from the word ‘in tact” or “complete.” “Character” comes from a word that describes a stamping tool and means “a distinctive mark.”

As Christians, we are set apart and called to a higher purpose.  We act with a high moral character no matter what this fallen world throws at us. Character is the root of integrity, and ultimately, the internal drive that makes integrity possible.

Other reading on character