How to React to Hate as a Christian Entrepreneur 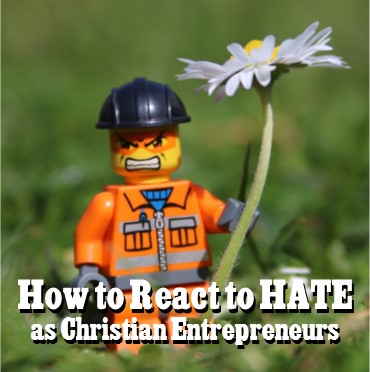 Reacting to Hate as Christian Entrepreneurs should start with love.

Let’s face it, we live in a world that is filled with hate.  As Christian entrepreneurs, we will have our fair share of hate thrown in our faces.  We may be called hypocrites, holier-than-thou, deluded, stupid, . . .it is sad that I can think of many more things that I have heard Christians called.

My wife pointed out that we live in the age of tolerance where it is OK to tolerate everything except Christians.  My wife doesn’t usually make statements like this, so I took note.  I wonder if it is because of the way Christians are portrayed in modern media or is it more about the actions of hateful Christians that makes headlines in the news.  Either way, Christians have a PR problem.

We must keep our perspective

Jesus said that we would be persecuted:  “If they persecute me, they will persecute you.” John 15:20.  Granted, we still have freedom of religion (in America, at least).  We can openly pray, read our Bible and even congregate.  Yet, we have to walk on eggshells when trying to share the love of Christ for fear of offending someone.

Our response must be wise

When people hate, we ought to react in love that much more.  We must take our words and back them up with our actions.  Instead of bombing abortion clinics, we should be loving the women who go there so much, and offering them solutions, that they never go through with their actions.

I don’t want to get too political.  I just want to open the conversation with Christian entrepreneurs.  How can we help a hurting world?  What can we do daily, weekly or hourly to show the love of Christ in such a way that even the most hateful hurt people will feel something powerful in the love of Christ?