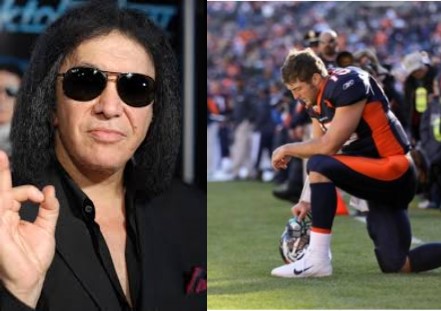 Have you heard the one about the rock star defending the football player? In 2013, Gene Simmons, KISS front man and rock star, defended Tim Tebow for his beliefs.

People were basically making fun of Tim because of his response to being let go from a team. It is sad when someone takes the high road and people pounce on him.

Simmons said, “He’s got a religious passion, as well he should, we’re in America. He’s proud to be a Christian, what’s wrong with that? And yet, with sports media and pop culture media, they make fun of his religion. Really? In America? If he was wearing a burqa, they wouldn’t dare say anything. But if you’re a Christian, you get to be picked on? What the hell?”

You may not agree with the expletive at the end, but realize that this is a ‘secular’ rock star calling out the wolf-like media.

You can choose to stand up for your beliefs and defend those who need defending. When someone is doing good, a simple encouragement could be all they need.

When was the last time you stood up for your beliefs or someone else’s? Take time today to encourage someone who is having a rough time. Show the love of Christ with the simplicity of kind words.

(Read the whole story here if you want.)